With all the “woe is me” economic news, who isn’t hungry for more business?

And for that matter, who isn’t just hungry?

That’s right Meat Cards offers your professional contact information seared by a laser into a piece of beef jerky.

Now that’s the kind of business interaction that makes an impact and can leave any potential client satisfied. OK,  at least their tummy will be satisfied.

For more creative uses of meat, check out this Meat Art post.

What smells worse than skunk roadkill?

How about 44 tons of rotting meat.

A town in South Dakota had a funk of a smell hovering over it when a meat plant owner abandoned his plant and left 44 tons of bison meat inside it. You read that correctly – TONS.

When the power was turned off due to non payment for electricity, the bison became a beast of an odor as it rotted.

The city eventually took it upon itself to remove the foul meat. Even the fire department was called in to help with the clean up.

Yahoo has the rest of the story of the putrid meat and its stinky fog.

No, it’s not the Bacon of the Month Club’s mailing for October.

Artist Simone Racheli uses paper mache, wax and other stuff to create full-sized objects that appear to be made out of meat. It’s a bit gross, but also compelling. I can’t look away.

If you can read Italian, here’s a story about the exhibition in an Italian art magazine.

If you don’t read Italian, InventorSpot has some more details about the exhibit. 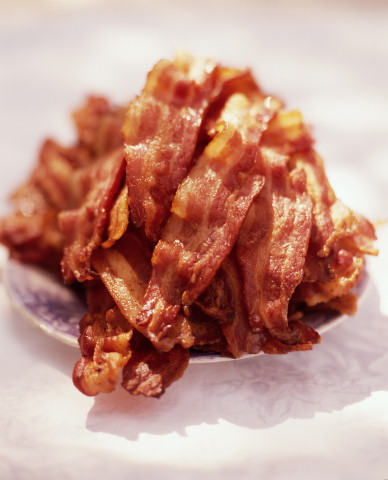 I may have found the answer to my prayers.

It’s the Bacon of the Month Club.

Shipped right to my door, every 30 days or so, an “artisan” bacon. MMMMMMMMMMmmmmmm.

The salty pig flesh isn’t the only thing members receive.

Why for a mere $150 I will receive an official membership card, a monthly bacon comic strip, a pig ballpoint pen, a pig’s nose (of the costume variety, not an actual fleshy snout), a T-shirt, recipes to use my fancy bacon in and an oinker-shaped toy.

This would be money well spent, I can tell.

However, there is a lot this membership doesn’t include.

Alas, there’s also no mention of Kevin as part of the membership package nor is there an official invitation to Tits McGee’s bacon party.

I guess nothing is perfect.